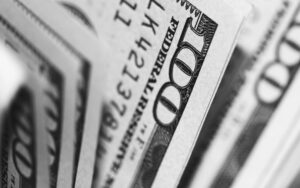 Delaware taxpayers from 2020 should expect to receive $300 rebate check from the state next month. | PHOTO COURTESY OF UNSPLASH/PEPI STOJANOVSKI

DOVER — In a sheer display of bipartisan power, a bill to spend some of the state’s record-setting surplus by mailing a $300 check to every Delaware taxpayer and adult moved from introduction to signed by Gov. John Carney in 14 days. 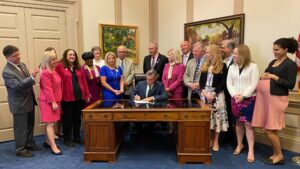 Gov. John Carney signs HB 360 on Thursday, just 14 days after it was first introduced in the statehouse. | PHOTO COURTESY OF THE GOVERNOR’S OFFICE

House Bill 360, known as the 2022 Delaware Relief Rebate Program, was signed by Carney on Thursday after it was approved by the State Senate in a unanimous vote. In the end, only three Republican House members – Richard Collins, Bryan Shupe and Michael Smith – voted against the measure.

“Delaware families who are dealing with higher costs at the grocery store and the gas pump,” Carney said in a statement after signing the bill. “Every taxpayer I’ve ever talked to expects us to manage their money in a way that’s responsible and sustainable over the long term. These direct payments to Delaware families are part of a broader, responsible budget proposal that will invest in education, our economy, and Delaware communities, and increase our reserves to prepare our state for the future.”

HB360 relies on 2020 tax returns to mail $300 checks directly to Delawareans. But a recent amendment to the bill expanded the scope of the rebate program, granting the state Department of Finance authority to share information with other state agencies. That would help to identify another 150,000 residents that may not have made enough income in 2020 to pay income tax.

The plan now would spend down $236 million of the surplus and would reach 750,000 Delawareans. The earlier version of the bill would impact 600,000 people, or roughly two-thirds of the state’s population.

The governor’s office reported that checks will be issued by the end of May to Delawareans who already filed their 2020 personal income tax returns. Within six months, the Department of Finance will also set up a website that allows Delawareans who may still fall through the cracks to request a rebate.

Throughout the pandemic, Delaware’s financial situation has performed better than expected, including the Delaware Economic and Financial Advisory Council (DEFAC). In March, DEFAC revised their forecast to add $260 million to the budget limit, which included a $800 million surplus.

While Carney did pause some of his planned budget measures in the first months of the public health crisis, state revenues held firm. Corporate revenues were not hampered by the dramatic shift of work, the real estate market remained red hot, and high-earners were still working and continued contributing to the state’s income tax.

House Minority Leader Danny Short (R-Seaford) said that he believed the one-time rebate was the right path to tread, noting that the Maryland legislature had fast-tracked a gas tax holiday, and was now facing pressure to extend it.

“This rebate will return approximately $230 million to Delaware citizens,” he said in a statement upon passage of HB 360. “My members believe this initiative should be the first significant step in a process to better balance the cost of providing state services and easing the tax burden on all Delawareans.”

In a comment to the Delaware Business Times, Shupe, Smith and Collins said they voted against HB 360 because they believed that more lasting change could be impacted through tax-cuts rather than a one-time payment.

“There were a couple of reasons, but the main reason had to do with addressing the growing ‘politics over people’ mentality in Dover. Families were struggling last year. Yet, where was the concern for giving tax relief then? It didn’t exist,” Smith said.

“Given the massive state surplus over the last two years, I believe we need to enact tax cuts,” Collins said in a separate statement. “The rebate, while well intentioned, undermines efforts to reduce the tax burden on our citizens and businesses … Tax reductions provide fuel for structured economic growth. The impact of the rebate will be fleeting, at best.”

The two representatives are sponsors on four bills combined that address taxes, including raising the senior tax credit, reducing the realty transfer tax, creating a tax credit for Delawareans with student loans as well as waiving agriculture and forestry use for tax assessment.

“While I understand the good intentions of the rebate, I do not believe this was the most appropriate mechanism to fix the structural imbalance in our revenue steam,” Shupe said “Instead of the quick fix of a rebate, we should be looking at more lasting changes that will have real, ongoing benefits for all Delawareans for years to come. Even more frustrating is that repeated attempts by the minority party to provide long-term financial stability for Delaware families have been largely ignored, even during the last two unprecedented years that the state raked in a surplus of over $1 billion dollars.”