Chemours became the first Delaware-headquartered company to suspend its operations in Russia in the wake of the war in Ukraine. | DBT PHOTO BY JACOB OWENS

WILMINGTON – Chemours, the global chemistry and advanced materials company, became the first Delaware-headquartered company to announce it was suspending business with Russia in the wake of its invasion of Ukraine.

The manufacturer has about 6,400 employees and 29 manufacturing sites around the world, serving about 3,200 customers in approximately 120 countries. It includes a small office in Moscow, the capital of Russia, officials said.

“Chemours condemns the senseless violence taking place and views continuing business as inconsistent with our company values. As always, we will work to meet the needs of our global customers throughout this process, however, we believe suspending business with Russian entities is the right thing to do,” Mark Newman, president and CEO for Chemours, said in a Thursday statement announcing the move. “We will continue to monitor the situation closely and reassess in the future.”

Chemours also announced a $100,000 donation to the International Committee of the Red Cross to support humanitarian efforts in the region.

“Every day we encourage our people to operate with the courage to make a difference. Over the past two weeks the people of the Ukraine have embodied such courage and perseverance. Now, we want to do our part and help make a difference by supporting those in need,” Newman added.

The decision by the Wilmington-headquartered Chemours comes amid a growing swell of companies that are boycotting Russia’s military invasion by suspending or pulling its business out of the country, led by corporate titans like Apple, Google, Amazon, Disney, Shell, BP, Mastercard, Visa, and more. Some of those companies have also acted against Belarus, a Russian ally that allowed the invasion’s staging to occur on its border.

Former DuPont spinoff Corteva AgriScience has one of the most complicated situations among the crisis, with more than 275 employees in Ukraine working for six subsidiaries, including at a $56 million production facility in Stasi, about 75 miles west of the battle-stricken city of Kharkiv. It’s operated that site for nearly a decade. 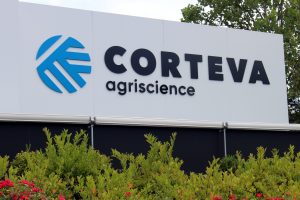 Corteva has suspended commercial sales in Russia and Belarus amid the war. | DBT PHOTO BY JACOB OWENS

Corteva, which designated Indianapolis as its new headquarters earlier this year after long being based near Wilmington, also has a known large sales market in Russia though. It sells herbicides, fungicides, and insecticides to Russian farmers, as the country is one of the world’s largest agricultural producers.

On Thursday, Corteva told Delaware Business Times that it has “paused all new commercial sales activities in Russia and Belarus, while at the same time continuing to evaluate and working to support food production in the region.”

“We are deeply concerned by the ongoing escalation, and our thoughts remain with those affected. The company continues to do all we can to protect our employees and their families, our customers, and the communities in which we operate. We have taken steps to safeguard our research, commercial and production facilities in Ukraine. The company continues to provide practical and accommodation support, and is working on additional financial options for impacted employees in the region. Corteva is also working with organizations to meet the immediate humanitarian needs arising from the crisis in Ukraine, and has committed financial and other aid to assist our colleagues and their communities.

“It is still too early to understand how this complex and dynamic situation will evolve and to determine any near-term impacts on our business,” a Corteva spokeswoman wrote to DBT.

The number of other Delaware companies with interests in the Russian market is smaller than many other states, though several have remained quiet on their plans for dealing with the outcry.

Notably, DuPont has operated an Innovation Center in Moscow since 2012, where researchers focus on innovation in the food, construction, oil and gas, rail, and automotive industries. It is also unclear whether the country has buyers for the company’s fabrics, resins, solar materials and more. DuPont did not respond to a request for comment Thursday on its plans in Russia.

Wilmington-based Solenis, a privately owned global producer of specialty chemicals used in water-intensive industries with roots in Hercules and Ashland, also has a production facility in the city of Perm, near the Ural Mountains in central Russia. Six years ago, the company reportedly invested $5 million into upgrades at the plant in response to strong sales of polyacrylamide powders in Russia. Solenis did not immediately respond to a request for comment sent Thursday afternoon about its operations and whether they had changed with the outbreak of war.

A spokeswoman for Ashland, the Wilmington-based chemical producer, told DBT that its Russian interests had been divested in deals in prior years. It does not currently have any manufacturing in the country or any direct customers, and it has been checking with third-party clients to ensure its products are not running afoul of any of the varied Western sanctions being instituted on Russia, she added.

JPMorgan Chase, a Top 3 employer in Delaware, said this week that it is exiting its business in Russia and has stopped pursuing any new business there. The multinational bank headquartered in New York has fewer than 200 employees in Russia, working mostly in the firm’s corporate and investment bank.

Likewise, Citigroup, the New York-based bank that employs a few thousand in Delaware, has been trying to sell its Russian consumer banking business for some time – a process that is likely to become severely complicated due to Western sanctions. For now, it is operating the business on a “limited basis,” according to officials. It too has made a $1 million donation to relief organizations, and will match employee donations up to an additional $500,000.

Discover Bank, which has a large workforce in New Castle, announced that its has suspended efforts to open a Russian branch office that began before the war. The Illinois-based credit card operator also halted transactions by sanctioned Russian banks and is suspending acceptance of all cards issued by Russian and Belarusian banks on its Discover Global Network.

Another major Wilmington-area employer has no choice but to continue operating in Russia, as AstraZeneca is bound by international humanitarian law to ensure drugs can continue to make it to the hands of innocent civilians on both sides of the conflict. The British-Swedish drug-maker, which has its U.S. headquarters in Delaware, reportedly has about 700 employees in 57 Russian cities, including a Moscow head office and a production facility just south of the capital city.