NEWARK – City National Bank, one of the largest West Coast banks that’s known as the “bank to the stars,” is planning a major expansion in Delaware.

The 35th largest bank in the country with more than $95 billion in assets, City National Bank has operated a trust office in the Linden Park office complex for several years. The company recently signed a lease for 30,000 square feet in the Buccini/Pollin Group-owned Iron Hill Corporate Center near Newark, according to Justin Rowley, a senior vice president of City National.

The new space will be home to a major workforce expansion for City National, growing its headcount by more than 475% in adding 253 new positions over the next few years, including operations managers, project managers, business analysts, operations specialists and other similar positions. That hiring is expected to begin in early 2023.

About 175 of those jobs will be lower, entry-level roles, but City National is preparing a $80,000 minimum salary at the office, which is about 10% higher than the state’s median household income.

The state’s public-private economic development organization, the Delaware Prosperity Partnership, has been working with City National since July on the project, and was reportedly considering other sites along the East Coast.

Geography played an important part to City National’s decision to come to Delaware, as it is equidistant to the bank’s hubs in New York and Washington, D.C., and close to the Philadelphia International Airport, which offers direct flights to Los Angeles.

Several of City National’s senior East Coast executives also work out of the current Pike Creek-area office, including Rowley, who is a Dewey Beach resident and a University of Delaware grad. 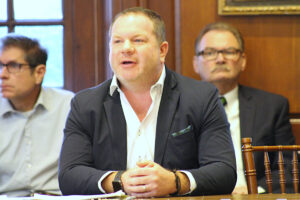 “We know the state very well. Many of the colleagues who work in our current state office have long-term and tenured experience with the state of Delaware. We know the talent and the university systems, and we know it can uniquely support our expanding growth,” Rowley told the CDF on Monday morning.

To support its expansion, the state’s job investment board, the Council on Development Finance, unanimously signed off Monday on a more than $3.53 million package of grants. That includes more than $2.75 million in a job performance grant to create the 253 jobs, $270,000 in a capital expenditure grant to support fit-out of its new offices and up to $500,000 for a workforce training grant.

The 68-year-old, Los Angeles-based bank is well-known for catering to Hollywood movie stars, helping to earn its moniker of “bank to the stars.” City National offers a full suite of personal, private and business banking, including wealth management, brokerage and leasing services, and software solutions. While supportive of customer needs, the Delaware workforce is not planned to be client-facing and focus on administrative and back-office needs, Rowley said.

Despite its roots in the City of Angels, the bank was acquired in 2015 by Royal Bank of Canada (RBC), the largest bank in Canada. Rowley said that while RBC is active in the management of City National, the American bank does have a large degree of autonomy in its work.

At Iron Hill Corporate Center, City National will be joining an office workforce that has seen a refresh in recent years, including the arrival of Discover’s workforce.

When asked about its decision to invest in a large office space as remote working has increased nationwide, Rowley said City National is actually seeing more of its colleagues desire a return to offices for at least a part of their work week.

“We are not finding that work-from-home is going to be a permanent fixture in the workplace and for the banking industry specifically; and we’re actually seeing a demand from people to have either an office presence or hybrid presence,” he explained. “It’s the reason why we’re looking to expand our physical presence and building a location that is new, fresh, enticing, and actually can build that collaborative work experience. So, we actually think that the expanded office presence … will help us with our recruitment.”