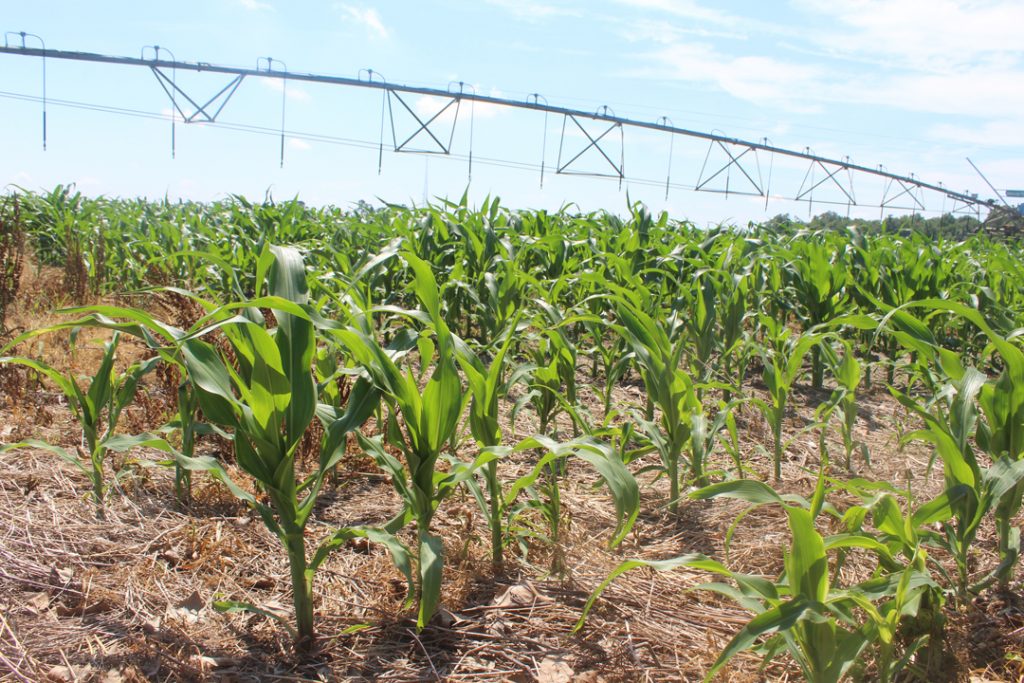 Corn growing in Sussex County is one grain in Delaware farmers crops To protect the crop, Delaware farmers have been increasingly buying into the USDA crop insurance program. | DBT PHOTO BY KATIE TABELING

Last September, a tornado ripped through Mullica Hill, N.J., and leveled a dairy farm that produced 17 million pounds of milk per year from about 1,400 cows. The EF-3 tornado spun off of the storms generated from Hurricane Ida, and toppled 80-foot-tall silos and trapped around 300 cows under the debris.

That happened 100 miles north from Georgetown, where Luke Clifton works at King Crop Insurance. Two months before that, two tornadoes touched down in central and southern Delaware — one in Harrington that traveled about 4 miles along U.S. Route 13, and a second that started in Milford and traveled just under 5 miles south to Slaughter Beach.

“That really ripped up crops, and with that dairy farm in New Jersey, it’s something that caught a lot of attention,” Luke Clifton said. “Farmers are always conscious about the weather, at all times. In a sense, they’re worried because it’s hard to say what’s a trend after a year of data. But when you see a tornado every year, that’s a shock to everyone.”

In Delaware, farming remains big business as 42% of its land is farmed, generating $1.06 billion in cash receipts in 2020. Last year, the state generated $306.7 million in crops like corn, soybeans, wheat hay and barley.

For farmers to protect a valuable investment, they look to insure it — literally. The U.S. Department of Agriculture runs a crop insurance program to protect themselves from extreme weather events. Farmers buy policies through private companies and pay premiums to insure any loss of revenue from wind damage, hail, drought.

The federal government subsidizes about 60% of the premium costs, which makes the policies less expensive. In Delaware, farmers paid $4.6 million in premiums while the USDA covered the remaining $7.2 million for crop insurance in 2021.

In Fiscal Year 2021, the USDA spent $8.8 billion on the program, which includes $5.9 billion in indemnities.

In Delaware, there were 2,582 policies issued for farms with 314,238 combined acreage. Total liability of $146.5 million for those crop insurance policies last year. Loss payouts were $2 million last year in the First State.

In other words, for every dollar placed in the crop insurance program, Delaware farmers received $1.68 back in the last 20 years.

Delaware Farm Bureau Executive Director Don Clifton II — who is Luke’s father — lauds the program as a stopgap to keep many farmers in business, especially in the uncertainty of weather. As a former state executive director for the USDA under the Clinton and Obama administrations, he noted the program became more popular in Delaware over time as it evolved.

Today, the most popular policy is a revenue-based policy among farmers, where farmers can typically insure between 50% and 75% of their crop, depending on the price index set in the spring of that year. For example, if a farmer insures 100 bushels per acre and the price index sets the price at $6, then the farmer is covered $450. If the crop falls below that expectation, the farmer will see a refund, minus their premium.

“That makes it flexible with the price, and once you lock that in, you can forward sell a contract with a cannery or a granary. It gets farmers to pull the trigger on revenue,” Don Clifton said. “I’ve personally benefited from it. Back in 2018, we got 8 inches of rain and it wiped out most of my pea crop.”

In the last two decades, the number of crop insurance policies sold jumped by 83% for Delaware farms, and liabilities rose 465%, according to data from the USDA. To Don Clifton, that shows that farmers were insuring their crops at more relevant levels and the products were getting better.

That could include hurricane provisions, which are more affordable in Delaware compared to other states. California suffers from extreme droughts, while other Southern and Midwestern states have to contend with flooding.

“Nationally, we are seeing considerably high indemnities payouts, especially continuous droughts in California. But in Delaware, we’re seeing extreme heat, and it’s going to cause more crop loss, but it won’t be a record year,” Luke Clifton added. “We’re always looking at the weather and talking about how it’ll impact losses, but that conversation isn’t as prevalent here.”

In Delaware, the conversation of today is more about wildlife – deer flushed out of the woods and finding a crop field to snack on – and the rainfall. In mid-August, Don Clifton, who farms soybeans, green peas and lima beans, saw 2 inches of rain in an otherwise dry month.

His neighbor, who grows corn, is reporting 250 bushels an acre for irrigated corn and 50 to 70 acres non-irrigated.

“The constant challenge of calculating and recalculating is something that’s extremely critical to this,” Don Clifton said. “With the volatile prices of crops and high prices of diesel fuel, it’s an internal dilemma everyone faces. Every year is not a bumper year, and it takes two to three years to recoup from two or three bad ones.”

Congress is preparing discussions on the 2023 Farm Bill, which may include changes to the crop insurance program to include conservation plans, which are voluntary at this point. Earlier this year, the USDA also launched a program to pay farmers $5 per acre to grow cover crops during 2022.