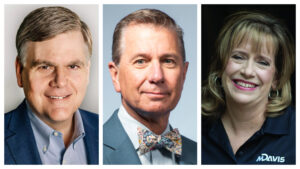 (L-R) Bill Provine, Bill Farrell and Peggy Del Fabbro were named to the 2022 class of the Delaware Business Hall of Fame. They will be inducted next week. | PHOTOS COURTESY OF DISI/M&T BANK/M.DAVIS & SONS

WILMINGTON – The Class of 2022 for the Delaware Business Hall of Fame will feature a cross-section of Delaware’s economy, with longtime leaders from the construction, banking and sciences industries.

The trio will be celebrated at an Oct. 26 ceremony held at the Wilmington campus of the hall’s host and organizer, Junior Achievement Delaware. They will join 73 other leaders who have been honored since the hall was formed in 1990. Honorees are selected based on their business, industry or community accomplishments that have positively influenced economic and workforce development in the region.

Del Fabbro, the fifth Davis family member to lead the 152-year-old company, runs one the state’s largest women-owned businesses. She has also served as a leader in the Women’s Business Enterprise National Council (WBENC), the largest certifier of women-owned businesses in the U.S. and a leading advocate for women business owners and entrepreneurs.

M. Davis has a diverse portfolio of products and services, from modular fabrication projects to mechanical and electrical services to power distribution products. It continues to grow today.

Provine was a DuPont executive when he began brainstorming an idea to create a more fertile startup environment in Delaware. Bringing together his employer with the state government and the University of Delaware, they formed the Delaware Innovation Space, which provides space and resources for growing startups on the DuPont Experimental Station campus. It has counted Prelude Therapeutics, Versogen and NiKang Therapeutics among its successes in the first five years.

“I am humbled and honored to be included and recognized alongside my fellow laureates – all of whom have been positive changemakers in our community,” Provine told Delaware Business Times, crediting his honor to his team and the Innovation Space partners who embraced the vision. “I also believe that the award is a reflection that the Innovation Space has become a beacon of economic growth for our community as it will continue to build new businesses, create jobs and enable entrepreneurs for generations to come.”

Farrell, who retired in May as executive vice president and a member of M&T Bank’s Management Group, overseeing the Institutional Client Services division at Wilmington Trust, was a longtime executive in the predecessor Wilmington Trust bank. He took over his final role in 2005 after the acquisition by M&T and helped grow the investment arm from about $45 million in annual revenue to more than $500 million today.

It is involved in billion-dollar deals across the world, including serving as the largest owner-trustee of commercial airplanes in the world and representing unsecured creditors in most of the Top 15 largest bankruptcies in history, including General Motors and Lehman Brothers.

Originally created in partnership with Hagley Museum & Library, the Hall of Fame honored historical and retired titans of industry for the impact of their work on economic and workforce development in the State and region. The Hall of Fame was later a partner with Accolade Alliance and began to include retired small business owners/entrepreneurs.

More recently, M&T Bank led the transition to include current and contemporary leaders who serve as role models to Junior Achievement students through their inventions/innovation, entrepreneurship, and/or strategic management. A more diverse and inclusive selection process led to five Laureates of Color being inducted in 2020 and 2021, and a growing pool of diverse candidates for future induction.

More information on the 2022 Delaware Business Leaders Hall of Fame reception and induction ceremonies is available on the Junior Achievement of Delaware website at https://delaware.ja.org/events/delaware-business-leaders-hall-of-fame