The organization, formed in 2007, works to provide the education and skills needed to develop, support and sustain small business enterprises, especially those in the minority community.

“I’m excited about the people that are coming and looking for opportunities to start a business,” said Jesse Pope, director of the Potts Entrepreneur Center. “That’s what we want to do — educate and sustain businesses and just make the quality of life as well as we can in the City of Lima.”

The organization provides training sessions to help people learn how to start and maintain their businesses.

The organization continues to work toward moving to the Central Zone Building, where there will be space for small businesses to get started in a “makerspace” environment.

The Potts Entrepreneur Center is in transition, Pope said. People needing its services can call the Lima/Allen County Chamber of Commerce at 419-222-6045 with questions.

The organization has an inspiration event planned for 4 p.m. April 3 at the Veterans Memorial Civic Center. It’s asking for all churches, local choirs and local singers to join in “The Power of the Throne Kingdom Wide Mega Choir,” aiming for more than 400 voices.

“This is all religions, all denominations, with diversity and inclusion,” said Jesse Lowe III, the newly elected president of the Potts Entrepreneur Center board and the owner of Black Lace Hair Salon. “We want everybody to participate at one time, and what brings people together than music?”

The goal is to raise money through sponsorships for the center, named after a respected community leader in Lima.

Potts ran a successful business, Potts Electric Service Inc., and became Lima’s first Black electrical contractor in May 1963. He worked at Lima’s refinery until 1991. He was the director of Bradfield Community Center for 12 years. He had numerous other stints of community service, including a term on Lima council, representing the 8th Ward. He died in May 2015. 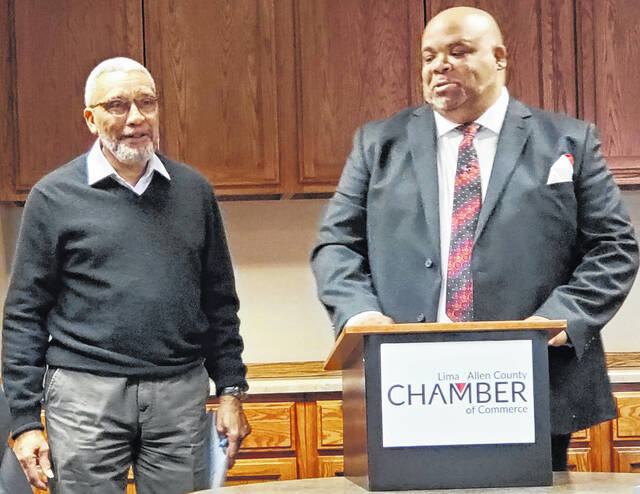 Jesse Pope, left, the director of the Walter C. Potts Entrepreneur Center, speaks at a recent Lima/Allen County Chamber of Commerce media conference alongside Jesse Lowe III, the newly elected president of the center’s board.