NEWARK – Charles Riordan, the University of Delaware’s vice president for research, scholarship and innovation who has been instrumental in the success and expansion of the STAR Campus, will leave his post this summer to become provost at Hofstra University in New York.

The appointment at the university located on Long Island, N.Y., is effective July 1, and Riordan will continue in his UD role until June 30, officials said. An interim vice president will be identified, and a search committee will be appointed in the coming months to choose Riordan’s permanent successor.

“Charlie Riordan has made outstanding contributions to our university throughout his distinguished career over the past 25 years. Most recently, as an integral member of our senior leadership team, he advanced the overall university research profile and stewarded entrepreneurship and innovation to new levels of impact,” UD President Dennis Assanis said in a statement.

Born in New York City, raised in Connecticut and graduating from the College of the Holy Cross in Massachusetts, Riordan first joined UD in 1997 as an inorganic chemistry professor, rising to chair the Department of Chemistry and Biochemistry from 2002 to 2007. He was named vice provost for graduate and professional education in 2010, vice provost for research in 2012 and deputy provost for research and scholarship in 2014. Along the way, he’s earned university awards for student mentoring as well as national industry recognitions.

As Hofstra’s provost, Riordan will serve as the chief academic officer with responsibility for the operation of the university’s academic units, including most of its schools and colleges. He will also chair the University Senate.

The opportunity to interact more with undergraduates and recruit and mentor faculty, roles he held as a former department chair, convinced him to pursue the Hofstra opportunity, Riordan told Delaware Business Times.

“For me, it’s an opportunity to be more engaged with the student experience, which I’m really passionate about,” he said. 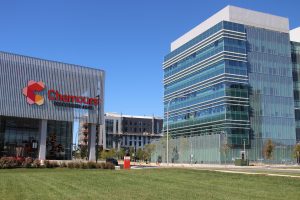 The University of Delaware’s STAR Campus has grown quickly under the leadership of Charles Riordan. | DBT PHOTO BY JACOB OWENS

For the last six years, Riordan has worked to advance and support UD’s research enterprise, which exceeds $180 million annually in externally funded projects. He has played a major role in shaping the Science, Technology and Advanced Research (STAR) Campus that replaced the former Chrysler auto manufacturing plant.

“I knew that this was a once-in-a-generation opportunity for the university,” he said of the role given to him first by then-UD President Patrick Harker. “I think that the STAR Campus was certainly an accelerant for economic development for the state, the region and the university, but it’s also an incredible asset for UD to accelerate its commitment to innovation and entrepreneurship.”

“I will say though, that the pace of growth of the STAR Campus in the last three or four years has exceeded even my expectations,” he added.

Riordan emphasized the importance of his partners in those endeavors, especially National Institute for Innovation in Manufacturing Biopharmaceuticals (NIIMBL) Director Kelvin Lee. 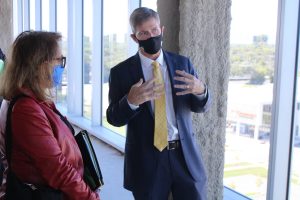 Charlie Riordan, the vice president of research, scholarship and innovation at UD, talks about the future of the STAR Campus with U.S. Commerce Assistant Secretary for Economic Development Alejandra Castillo during a September tour. | DBT PHOTO BY JACOB OWENS

“NIIMBL has just been a remarkable transformative program for the state, for the university and for the nation,” he said. “That program has been so impactful over the first five years but I can’t even imagine what it’s going to look like in the next five to 10 years. It’s just really poised for success.”

Riordan also helped lead the creation of the Delaware Innovation Space, a public-private nonprofit incubator, along with founding partners the state of Delaware and DuPont. He noted that Assanis personally worked to advance the project before he even took office at UD, and that the Innovation Space survived a change in governor during its planning.

“It came together pretty quickly because all the partners really wanted this to happen,” he said, noting that the project happened at an important time as then-DowDuPont was downsizing.

Today, Riordan serves as the chair of its board of directors and the Innovation Space has supported the growth of several companies poised to be major future employers. Prelude Therapeutics went public while stationed out of the Innovation Space and is now planning a major investment in the Wilmington area for a new headquarters.

“Charlie is a great colleague and leader with the rare gift of intellectual strength combined with emotional capacity to connect with people at all levels,” Bill Provine, the CEO of the Innovation Space, told Delaware Business Times. “Charlie was instrumental in the establishment of The Innovation Space and has been an active partner in achieving its significant growth over the last five years.”

For those in the research and economic development space, Riordan was often the first point of contact for the university as his responsibilities vary widely and his institutional knowledge runs deep. He also has oversight of the Office of Economic Innovation and Partnerships (OEIP) and the university’s six multidisciplinary research institutes.

Much of the work he’s completed in recent years has helped UD create a pipeline of entrepreneurship, growing research projects into startups and eventually scaling their operations off campus.

“It’s been very much an intentional journey at the university and it’s exciting to see some of the fruits of those labors,” Riordan said.