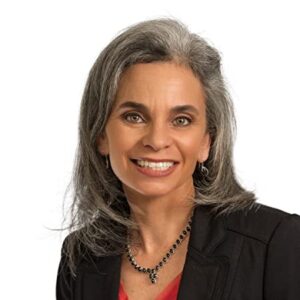 Susan Alexander believed she ruined her chances for a General Motors job. In 1975, Alexander, an MBA student at the University of Cincinnati, accepted a summer internship at the organization. Each intern ended their summer presenting their key learnings to senior leaders. As a trained musician, Alexander decided to play the violin to illustrate her experiences observing how a diversity of approaches could benefit GM.

The company faced a changing marketplace and diversifying customers. To keep up with these new contexts, Alexander recognized the need to honor varied insights.

“I suggested that diversifying their staff could prepare them for the inevitable demographic shifts in their customer base. Combining input from different disciplines, from different lived experiences and from different sexes, races, and cultures could only strengthen their decision-making and design process,” Alexander said. “Would cars designed and marketed by white men appeal to increasingly diverse customers?”

To convey that idea, she performed a piece of music, explained how each voice in the piece played a role, similar to those found in the workplace, and asked the executives to reflect on it.

“No one clapped … there were no questions. Everyone silently filed out of the conference room, and I was left wondering what I had done,” Alexander recalled.

Alexander faced a challenge. Does she act authentically to speak in a way that worked for her or conform to the organizational norms and try to fit in? Does she praise the current approach or encourage all to think differently? The tug-of-war between authenticity and conformity is universal, though it is one that women and minorities experience more acutely as they enter into a workforce defined by norms often different from their own.

From either/or to both/and

Over the last 25 years, we have studied how people navigate tensions like these.

In our research, we find that people typically respond to tensions with an either/or approach that seeks to make a clear decision. Competing demands foster uncertainty that trigger anxiety and discomfort. Making a choice helps to reduce that discomfort. Such an approach is natural, but it is limited at best and detrimental at worst, leading us down vicious cycles.

First, psychology demonstrates our need for commitment and consistency. Once making an either/or choice, people stick with that either/or choice even if it no longer serves the situation. We describe this kind of intensifying behavior as falling down a rabbit hole.

Second, when people find the situation around them demands a different approach, they often shift dramatically and completely, leading to a pattern of overcorrection. We describe this pattern as a wrecking ball, where the shift to an opposing approach takes away the good with the bad.

Finally, either/or thinking sets up a right/wrong polarization between opposing groups. We describe this pattern as trench warfare; each group reinforces its own opinions while denigrating and often dehumanizing the opposition.

An alternative to these approaches involves both/and thinking, embracing competing demands simultaneously. Rather than choose between authenticity and conformity, successful leaders seek to embrace both. We have identified several strategies that can help to do so.

Like Carlisle, leaders rewarded Alexander’s authentic bravery. Alexander returned to her desk convinced that she blew any job opportunities given the initial chilly response to her violin performance in the GM boardroom. In fact, the opposite happened. Her courage and bold reflections intrigued the senior leaders. They started calling with curiosity to know more and with job offers. She appreciated the invitations. Ultimately, however, she turned them down and eventually became Chief Human Resources Officer at Sotheby’s, the global auction house, where her artistic gifts were a better cultural fit, a more profound both/and solution.

Wendy Smith, faculty director of the Women’s Leadership Initiative at the University of Delaware, and Marianne W. Lewis, dean at the Lindner College of Business at the University of Cincinnati, are the authors of “Both/And Thinking: Embracing Creative Tensions To Solve Your Toughest Problems.”